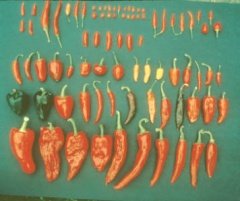 Capsicums, which are often called chili peppers or hot peppers, are the fully ripened, bright red, long and variably sized fruits (length: 5 – 12 cm; diameter up to 5 cm) of Capsicum annuum, which is a member of the nightshade family (Solanaceae).

The fruit of most species of Capsicum contains capsaicin a lipophilic chemical that can produce a strong burning sensation (pungency or spiciness) in the mouth of the unaccustomed eater. Most mammals find this unpleasant, whereas birds are unaffected. The secretion of capsaicin protects the fruit from consumption by mammals while the bright colors attract birds that will disperse the seeds.

Capsaicin is present in large quantities in the placental tissue (which holds the seeds), the internal membranes and, to a lesser extent, the other fleshy parts of the fruits of plants in the genus Capsicum. Contrary to popular belief, the seeds themselves do not produce any capsaicin, although the highest concentration of capsaicin can be found in the white pith around the seeds.

The amount of capsaicin in the fruit of Capsicums is highly variable and dependent on genetics and environment, giving almost all types of Capsicums varied amounts of perceived heat. The only Capsicum without capsaicin is the bell pepper, a cultivar of Capsicum annuum, which has a zero rating on the Scoville scale. The lack of capsaicin in bell peppers is due to a recessive gene that eliminates capsaicin and, consequently, the “hot” taste usually associated with the rest of the Capsicum family.

Chili peppers are of great importance in Native American medicine, and capsaicin is used in modern medicine—mainly in topical medications—as a circulatory stimulant and analgesic. In more recent times, an aerosol extract of capsaicin, usually known as capsicum or pepper spray, has become widely used by police forces as a non-lethal means of incapacitating a person, and in a more widely dispersed form for riot control, or by individuals for personal defence.

Although black pepper and Sichuan pepper cause similar burning sensations, they are caused by different substances—piperine and hydroxy-alpha sanshool, respectively.

Capsicum is used as a seasoning in cooking and in the food industry. Ground capsicum is an important ingredient in curry.

Capsicum fruits and peppers can be eaten raw or cooked. Those used in cooking are generally varieties of the C. annuum and C. frutescens species, though a few others are used as well. They are suitable for stuffing with fillings such as cheese, meat or rice.

They are also frequently used both chopped and raw in salads, or cooked in stir-fries or other mixed dishes. They can be sliced into strips and fried, roasted whole or in pieces, or chopped and incorporated into salsas or other sauces, of which they are often a main ingredient.

They can be preserved in the form of a jam, or by drying, pickling or freezing. Dried peppers may be reconstituted whole, or processed into flakes or powders. Pickled or marinated peppers are frequently added to sandwiches or salads. Frozen peppers are used in stews, soups, and salsas. Extracts can be made and incorporated into hot sauces.

Capsicums are packaged in, among other things, double-layered jute fabric bags lined with polybags.

Standard containers may be used, subject to compliance with lower limits for water content of goods, packaging and container flooring.

Fresh water damage causes blackening as well as mould growth and lumping, taking on a taint, and in turn will give off a pungent odour. The product should be stowed in well ventilated holds.

Capsicum is subject to loss in weight through drying out. This may be due to being loaded in too damp condition. If not properly dried at the time of bagging, the produce is liable to mould growth, and if packed (bagged) tightly will generate heat. This may be aggravated by high humidity prior to shipment.

Capsicums should be transported in areas which exhibit the lowest temperatures during the voyage and are dry. In any event, storage beneath the weather deck or, in the case of shipping in containers, in the uppermost layer on deck, must be avoided as the deck or container is strongly heated by the intense tropical sun and, at temperatures of > 25°C, Essential Oils may be lost.

Spices are hygroscopic goods (hygroscopicity), which interact with the moisture in the air. The risk of mold growth is naturally at its greatest in warm, damp air. Even small amounts of moisture/humidity may result in loss of color and spice content in capsicums, which should consequently be stored away from goods which are sensitive to moisture/humidity or release moisture.

If the product is at “shipping dryness”, it does not have to be ventilated during transport. However, if the water content does not meet these guidelines, the recommended ventilation conditions are an air exchange rate of 6 changes/hour (airing).

Provided that the recommended storage conditions are complied with, capsicums may be kept for up to 12 months.