Guidelines for setting up ICD and CFS in India 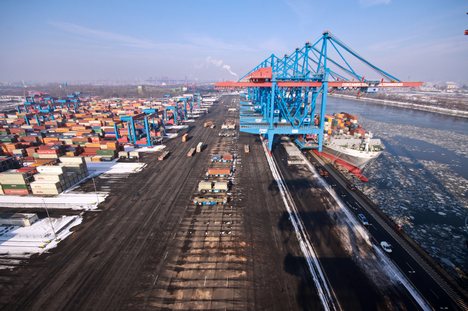 An Inland Container Depot / Container Freight Station may be defined as :-

A common user facility with public authority status equipped with fixed installations and offering services for handling and temporary storage of import/export laden and empty containers carried under customs control and with Customs and other agencies competent to clear goods for home use, warehousing, temporary admissions, re-export, temporary storage for onward transit and outright export. Transshipment of cargo can also take place from such stations.
2.    DISTINCTION BETWEEN AN ICD & A CFS

Functionally there is no distinction between an ICD/CFS as both are transit facilities, which offer services for containerization of break bulk cargo and vice-versa. These could be served by rail and/ or road transport. An ICD is generally located in the interiors (outside the port towns) of the country away from the servicing ports. CFS, on the other hand, is an off dock facility located near the servicing ports which helps in de-congesting the port by shifting cargo and Customs related activities outside the port area. CFSs are largely expected to deal with break-bulk cargo originating/terminating in the immediate hinterland of a port any may also deal with rail borne traffic to and from inland locations.

Keeping in view the requirements of Customs Act, and need to introduce clarity in nomenclature, all containers terminal facilities in the hinterland would be designated as “ICDs”.
3.    Function’s OF ICDs/CFSs

The primary functions of ICD/CFS may be summed up as under:

4.    The operations of the ICDs/CFSs revolve around the following centres of activity:-

i.) Rail Siding (in case of a rail based terminal)
The place where container trains are received, dispatched and handled in a terminal. Similarly, the containers are loaded on and unloaded from rail wagons at the siding through overhead cranes and / or other lifting equipments.

ii) Container Yard
Container yard occupies the largest area in the ICD.CFS. It is stacking area were the export containers are aggregated prior to dispatch to port, import containers are stored till Customs clearance and where empties await onward movement. Likewise, some stacking areas are earmarked for keeping special containers such as refrigerated, hazardous, overweight/over-length, etc.

iii) Warehouse
A covered space/shed where export cargo is received and import cargo stored/delivered; containers are stuffed/stripped or reworked; LCL exports are consolidated and import LCLs are unpacked; and cargo is physically examined by Customs. Export and import consignments are generally handled either at separate areas in a warehouse or in different nominated warehouses/sheds.

iv) Gate Complex
The gate complex regulates the entry and exist of road vehicles carrying cargo and containers through the terminal. It is place where documentation, security and container inspection procedures are undertaken.

The benefits as envisaged from an ICD/CFS are as follows :-

For the ICD/CFS to be successful, reduction in total transport cost is a prime criterion, as there is a possibility of marginal increase in total handling cost per box on origin to destination basis. This underlines the need for sound economic justification for setting up ICD/CFS through a carefully evaluated traffic likely to be handled at the proposed facility. A survey/feasibility study must precede the setting up of all ICDs/CFSs and copy of the report should invariably accompany the application for setting up such a facility. Data for carrying out analysis could be from secondary sources and field observations, structured over time and space. The latter is more realistic and truthful. Prior discussions must be held with exporters, shipping lines, freight forwarders, port authorities, concerned Commissioners of Customs/Excise etc., and their point of view fully reflected in the report.

2. The traffic flows between Inland centres of production and ports need to be analysed with reference to :-

— Possible reduction in tonne per kilometre or

— Box per kilometre costs.
3. The facility has to be economically viable for the management and attractive to users, to the railways for full train load movements; to other transport operators; seaports; shipping lines; freight forwarders etc. must have certain minimum amount of traffic. The prospective entrepreneurs are, therefore, strongly advised to study very carefully the viability of the project from the TEU traffic availability point of view.

In the background of growing international trade, the infrastructure facility may have to precede the actual generation of demand. This is particularly important as such facilities have a long gestation period for being fully operationalized. Though it is not proposed to lay down any minimum TEU figures as part of the criteria for approval of ICDs/CFSs, following are suggested indicative norms:-

The minimum area requirement for a CFS would be One Hectare and for ICD Four Hectare. However, a proposal could also be considered having less area on consideration of technological upgradation and other peculiar features justifying such a deviation.

5. DESIGN AND LAY-OUT OF ICD/CFS

The design and layout should be the most modern state-of-art equipped with mechanical/electrical facilities of international standards. Key to a good lay-out is the smooth flow of containers, cargo and vehicles through the ICD/CFS. The design and lay out should take into account initial volume of business, estimated volume in 10 years’ horizon and the type of facilities exporters would require. The initial lay out should be capable of adaptation to changing circumstances. The design broadly should encompass features like (rail) siding, container yard, gate house and security features, boundary wall (fencing), roads, pavements, office building and public amenities. The track length and number of tracks should be adequate to handle rakes and for stabling trains where relevant.

The perimeter fencing and lighting must meet the standards required by Customs authorities. The gate being the focal point of site security should be properly planned.

The administration building is the focal point of production and processing of all documentation relating to handling of cargo and containers and its size will be determined by the needs of potential occupants. Fixed provisions should be made for sanitation facilities and possibly a food service facility.

A good communication system and computerization and EDI connectivity is essential. Following Infrastructure should be available at the ICDs/CFSs

Provision of standard pavement for heavy duty equipment for use in the operational and stacking area of the terminal. In cases where only chassis operation is to be performed, the pavement standard could be limited to that of a highway.

Adequate parking space for vehicles awaiting entry to the terminal.

Boundary wall according to standards specified by Customs.

Computerised processing of documents with capability of being linked to EDI.

The ICD/CFS would select most modern handling equipment for loading, unloading of containers from rail flats, chassis, their stacking, movement, cargo handling, stuffing/destuffing, etc. Following minimum equipment should be made available at ICDs/CFSs (Reach stacker may not be mandatory:

Dedicated equipment such as lift truck (front end loader, side loader or reach-stacker), straddle carrier, rail mounted yard gantry crane, rubber tyred yard gantry crane, etc. of reputed make and in good working condition (not more than 5 to 8 years old) and equipped with a telescopic spreader for handling the 20 ft and 40 ft boxes. The equipment must have a minimum residual life of 8 years duly certified by the manufacturer or a recognized inspection agency. An additional unit of equipment should be provided when the throughput exceeds 8000 TEUs per annum or its multiples for lift truck based operations.

Small capacity (2 to 5 tonnes) forklifts must be provided for cargo handling operations in all terminals.

The parties will be required to provide at their own cost all infrastructure facilities including land, track, handling equipment for containers, maintenance of assets including track, rolling stock, etc. as per extant railway rules applicable to private sidings. The cost of the railway staff would be borne by the party as per the prevailing Government policy.

Tariff structure and costing should be worked out along with the feasibility study and information provided with the application.

The main function of an ICD/CFS being receipt, despatch and clearance of containerised cargo, the need for an up-to-date inventory control and tracking system to locate containers / cargo is paramount. Each functional unit of the facility (e.g. siding, container yard gate, stuffing/de-stuffing area, etc.) should have up-to-date and where possible on-line, real time information about all the containers, etc., to meet the requirements of customers, administration, railways etc. As far as possible, these operations shall be through electronic mode.

PROCEDURE FOR APPROVAL OF ICD/CFS AND ITS IMPLEMENTATION

1.    Proposals for setting up ICD/CFS will be considered and cleared, on merits, by an Inter Ministerial Committee for ICDs/CFSs, which consists of officials of the Ministries of Commerce, Finance (Department of Revenue), Railways and Shipping. Views of the State Governments as necessary would be obtained.

2.    Application 10 copies in enclosed form should be submitted to the Infrastructure Division in the Ministry of Commerce, Udyog Bhavan, New Delhi. Application must be accompanied by 10 copies of feasibility reports mentioned in the guidelines.

3.    The applicant should also send a separate copy of the application to the jurisdictional Commissioner of Customs. The Commissioner of Customs will send his comments to the Ministry of Commerce and the Central Board of Excise & Customs (CBEC) within 30 days. In case, the project is planned in a port town, a copy of the proposal should also be sent to the concerned Port Authority who would furnish their comments within 30 days to the Ministry of Surface Transport and the Ministry of Commerce.

4.    The applicants are also requested to familiarise with the statutory Custom requirements in relation to Bonding, Transit Bond, Security Insurance and other necessary procedural requirements and cost recovery charges payable before filing the application.

6.    On acceptance of a proposal, a Letter of Intent will be issued to the applicant, which will enable it to initiate steps to create infrastructure.

7.    The applicant would be required to set up the infrastructure within one year from the date of approval. The Ministry of Commerce may grant an extension of six months keeping in view the justification given by the party. Thereafter, a report would be submitted to IMC to consider extension for a further (final) period of six months. The IMC may consider extension or may submitted to IMC to withdraw the approval granted.

8.    The applicant, after receipt of approval, shall send quarterly progress report to Ministry of Commerce. Three formats (given as annexure I to III) for sending the quarterly/ annual report shall have to be submitted to Department of Commerce through electronic mode as well as through hard copy.

9.    After the applicant has put up the required infrastructure, met the security standards of the jurisdictional Commissioner of Customs and provided a bond backed by bank guarantee to the Customs, final clearance and Customs notification will be issued.

10.    The approval will be subject to cancellation in the event of any abuse or violation of the conditions of approval.

11.    The working of the ICD/CFS will be open to review by the Inter Ministerial Committee.

Multi-Modal and Inter-Modal transport are same.. or not?