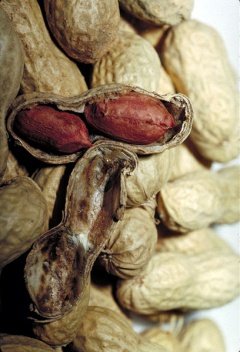 The peanut, or groundnut (Arachis hypogaea), is a species in the legume or “bean” family (Fabaceae). The peanut was probably first domesticated and cultivated in the valleys of Paraguay. It is an annual herbaceous plant growing 30 to 50 cm tall. The leaves are opposite, pinnate with four leaflets (two opposite pairs; no terminal leaflet), each leaflet 1 to 7 cm (⅜ to 2¾ in) long and 1 to 3 cm broad.

The flowers are a typical peaflower in shape, 2 to 4 cm across, yellow with reddish veining. Hypogaea means “under the earth”; after pollination, the flower stalk elongates causing it to bend until the ovary touches the ground. Continued stalk growth then pushes the ovary underground where the mature fruit develops into a legume pod, the peanut – a classical example of geocarpy. Pods are 3 to 7 cm long, containing 1 to 4 seeds.

Peanuts are known by many other local names such as earthnuts, ground nuts, goober peas, monkey nuts, pygmy nuts and pig nuts. Despite its name and appearance, the peanut is not a nut, but rather a legume.

Peanuts are particularly susceptible to contamination during growth and storage. Poor storage of peanuts can lead to an infection by the mold fungus Aspergillus flavus, releasing the toxic and highly carcinogenic substance aflatoxin. The aflatoxin-producing molds exist throughout the peanut growing areas and may produce aflatoxin in peanuts when conditions are favorable to fungal growth.

Harvesting occurs in two stages. In mechanized systems, a machine is used to cut off the main root of the peanut plant by cutting through the soil just below the level of the peanut pods. The machine lifts the “bush” from the ground and shakes it, then inverts the bush, leaving the plant upside down on the ground to keep the peanuts out of the soil. This allows the peanuts to dry slowly to a bit less than a third of their original moisture level over a period of three to four days. Traditionally, peanuts are pulled and inverted by hand.

After the peanuts have dried sufficiently, they are threshed, removing the peanut pods from the rest of the bush.

Thousands of peanut cultivars are grown, with four major cultivar groups being the most popular: Spanish, Runner, Virginia, and Valencia. Certain cultivar groups are preferred for particular uses because of differences in flavor, oil content, size, shape, and disease resistance. For many uses the different cultivars are interchangeable.

Most peanuts marketed in the shell are of the Virginia type, along with some Valencias selected for large size and the attractive appearance of the shell. Spanish peanuts are used mostly for peanut candy, salted nuts, and peanut butter. Most Runners are used to make peanut butter.

Peanuts have a thin, netted, wrinkly, fragile shell (pod) with 1 – 4 (generally 2) kernels, which are 1.5 – 2.5 cm in size. The shell fraction amounts to 25%. The peanut is native to South America and is cultivated in all tropical and sub-tropical regions of the world.

Peanuts are transported both shelled and unshelled. Peanut kernels are surrounded by a fine, brown seed coat, which contains antioxidants which protect the kernels against the penetration of atmospheric oxygen and thereby prevent them from becoming rancid.

Peanuts have many uses. They can be eaten raw, used in recipes, made into solvents and oils, used in make-up, medicines, textile materials, peanut butter, as well as many other uses. Popular confections made from peanuts include salted peanuts, peanut butter (sandwiches, peanut candy bars, peanut butter cookies, and cups), peanut brittle, and shelled nuts (plain/roasted). Salted peanuts are usually roasted in oil and packed in retail-size plastic bags or hermetically sealed cans. Dry roasted salted peanuts are also marketed in significant quantities. Peanuts are often a major ingredient in mixed nuts because of their inexpensiveness compared to Brazil nuts, cashews, walnuts, and so on. Although peanut butter has been a tradition on camping trips and the like because of its high protein content and the fact that it resists spoiling for long periods of time, the primary use of peanut butter is in the home, but large quantities are also used in the commercial manufacture of sandwiches, candy, and bakery products. Boiled peanuts are a preparation of raw, unshelled green peanuts boiled in brine and often eaten as a snack. More recently, fried peanut recipes have emerged – allowing both shell and nut to be eaten. Peanuts are also used in a wide variety of other areas, such as cosmetics, nitroglycerin, plastics, dyes and Paints.

As a legume with a high protein content (24 – 35%), the peanut is one of the world’s most important staple foods after wheat. They are grown to be eaten fresh and for oil extraction (20 – 60% oil content). After soya oil, peanut oil occupies second place in world vegetable oil production.

Groundnuts
Usually shipped in bags. Old groundnuts have a dark appearance, dry and wrinkled, whereas fresh produce is well formed and of a light brown colour. Loss of weight from drying out can be considerable, especially in freshly harvested nuts. Heating due to inherent vice may be evident by its having commenced in the centre of the bags; groundnuts next to the sacking of the bags are usually found on examination to be sound or in better condition than those in the centre. Heating may also be caused by inadequate ventilation and crushing by pressure.

Some shippers export groundnuts during the new crop season mixed with the previous season’s nuts thereby increasing the danger of infestation. This practice, however, is much less common these days. All shipments should be accompanied by certificates as to their condition, quality and moisture content. Chinese groundnuts are usually shipped with a certificate to the effect that the moisture content is less than 9%, but damage is often found despite the statement showing a lesser moisture content. Water action on groundnuts is serious because of the high protein content of the seed. Small amounts of water tend to make the seed rubbery and consequently difficult to process. If the damage is long-standing then the wetting of the nuts generally leads to fermentation. The nuts, then, according to the amount of damage:

Hydrolysis in the oil and a marked increase in free fatty acid may follow. If the damage is excessive ultimately it becomes impossible to process the nuts by normal methods. Drying will improve matters but the oil is usually permanently damaged. The rise in acidity causes low yields on refining and, owing to the fact that the rise is usually accompanied by oxidation, poor quality refined oil is the result. These results depend on the amount of water and the length of time elapsing since the damage took place.

Groundnut Kernels
Shipped in bags. The size and colour of groundnut kernels vary according to the country of origin. The main origins of supply are U.S.A., China and Argentina. The colour varies from a pale buff to a deep red or reddish brown, but all kernels in good condition have a bright appearance. Decortication, which is done by machinery, frequently results in a percentage of split kernels. Kernels are subject to deterioration if shipped in a wet condition or with a high moisture content and, apart from mould or mildew, which may appear externally, the kernels are liable to heat internally. Kernels which have been stored for any length of time before shipment are subject to weevil infestation, evidenced by a thin layer of dust on the outside of the kernels. For crushing purposes this infestation, unless really extensive, is not a serious matter. 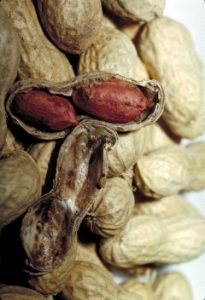 Heated kernels affect the quality of the oil, and the resultant high acidity can be a serious matter, as it necessitates extra refining.

Groundnut kernels require clean/dry stowage. Cases are known where complete parcels were condemned for human consumption in connection with a musty taste. This was as a result of stowage together with sawn timber and/or coconuts.

These days, peanuts are mainly transported in containers. Conventional loading methods are now used only by China. Unshelled peanuts are predominantly packaged in polysacks in quantities of 25 – 30 kg (50 – 60 kg where shelled). Shelled peanuts for producing peanut oil, butter etc. are generally transported loose in bulk. Blanched peanut kernels are frequently packaged in 50 kg polysacks and unshelled nuts are also packaged in 10 kg cartons. Transport is also possible as Bulk Cargo in ventilated containers (coffee containers), if the water content of the goods is within the safe carrying limit and protection against solar radiation is ensured (-> self-heating). The sorption isotherm for peanut kernels shows that, at a water content of 8%, the mold growth threshold is reached at an equilibrium moisture content of 75%.

Favorable travel temperature range: 5 – 25°C. At temperatures < 5°C, fresh cargo is subject to cold damage and spoilage. Temperatures > 30°C should not prevail for a long period, as such temperatures promote respiration of the cargo. Heated nuts become rancid and thus inedible. Low temperatures can only limit hydrolytic/enzymatic fat cleavage and cargo respiration. It is therefore of primary importance to ensure storage stability by compliance with water content limit values.

Peanuts which have become too moist have a tendency to develop mold (Caution: formation of aflatoxin). With bagged loads, the dunnage or the container must be dry and the bags must not be stowed directly against metal parts to protect them from hold or container sweat.

Reference is made to the relevant IMO regulations on hazardous cargo (“Seed Cake”).