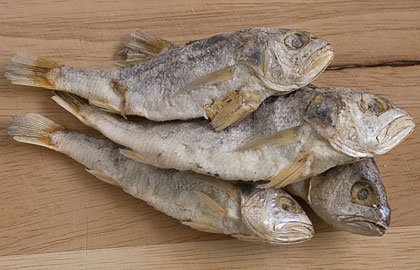 Fresh fish rapidly deteriorates unless some way can be found to preserve it. Drying is a method of food preservation that works by removing water from the food, which inhibits the growth of microorganisms. Open air drying using sun and wind has been practiced since ancient times to preserve food.. Water is usually removed by evaporation (air drying, sun drying, smoking or wind drying) but, in the case of freeze-drying, food is first frozen and then the water is removed by sublimation. Bacteria, yeasts and moulds need the water in the food to grow, and drying effectively prevents them from surviving in the food.

Fish are preserved through such traditional methods as drying, smoking and salting. The oldest traditional way of preserving fish was to let the wind and sun dry it. Drying food is the world’s oldest known preservation method, and dried fish has a storage life of several years. The method is cheap and effective in suitable climates; the work can be done by the fisherman and family, and the resulting product is easily transported to market.

Stockfish is unsalted fish, especially cod, dried by cold air and wind on wooden racks on the foreshore. The drying racks are known as fish flakes. Cod is the most common fish used in stockfish production, though other whitefish, such as pollock, haddock, ling and tusk, are also used.

Clipfish; over the centuries, several variants of dried fish have evolved. Stockfish, dried as fresh fish and not salted, is often confused with clipfish, where the fish is salted before drying. After 2–3 weeks in salt the fish has saltmatured, and is transformed from wet salted fish to Clipfish through a drying process. The salted fish was earlier dried on rocks (clips) on the foreshore. The production method of Clipfish (or Bacalhau in Portuguese) was developed by the Portuguese who first mined salt near the brackish water of Aveiro, and brought it to Newfoundland where cod was available in massive quantities. Salting was not economically feasible until the 17th century, when cheap salt from southern Europe became available to the maritime nations of northern Europe. 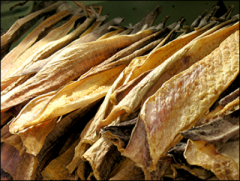 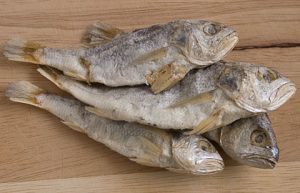 The water activity in a fish is defined as the ratio of the water vapour pressure in the flesh of the fish to the vapour pressure of pure water at the same temperature and pressure. It ranges between 0 and 1, and is a parameter that measures how available the water is in the flesh of the fish. Available water is necessary for the microbial and enzymatic reactions involved in spoilage. There are a number of techniques that have been or are used to tie up the available water or remove it by reducing the water activity. Traditionally, techniques such as drying, salting and smoking have been used, and have been used for thousands of years. These techniques can be very simple, for example, by using solar drying. In more recent times, freeze-drying, water binding humectants, and fully automated equipment with temperature and humidity control have been added. Often a combination of these techniques is used. 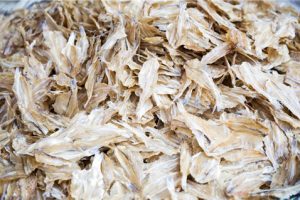 Manufacturing and usage
The science of producing good stockfish is in many ways comparable to that of making a good cognac, parma ham, or a well matured cheese. The slow food movement insists that all these artisanal products must be made on a small scale and given time to mature.

The fish is prepared immediately after capture. After gutting the fish, it is either dried whole, or split along the spine leaving the tail connected. The fish is hung on the “hjell” from February to May. Stable cool weather protects the fish from insects and prevents an uncontrolled bacterial growth. A temperature just above zero degrees Celsius, with little rain, is ideal. Too much frost will spoil the fish, as ice destroys the fibres in the fish. The climate in northern Norway is excellent for stockfish production. Due to the stable conditions, the stockfish produced in Lofoten is regarded as the best. The traditional cod harvest in Lofoten also takes place during the best drying time. Due to a milder and more humid climate, salted/dried whitefish (klippfisk) was more common in the fisheries districts of Western Norway.

After its three months hanging on the “hjell”, the fish is then matured for another two to three months indoors in a dry and airy environment. During the drying, about 80% of the water in the fish disappears. The stockfish retains all the nutrients from the fresh fish, only concentrated; it is therefore rich in proteins, vitamins, iron, and calcium.

After sorting by quality, most of the stockfish is exported to Italy, Croatia and Nigeria. In Norway and Iceland, the stockfish is mostly used as a snack and for lutefisk production. In Italy, the fish (called stoccafisso) is soaked and used in various courses, and is viewed as a delicacy.

Stockfish is popular in West Africa, where it is used in the many soups that complement the grain staples fufu and garri. The Bakweri, who are a fishing people of the English-speaking part of Cameroon, use stockfish in flavoring their palm nut or banga soup, which is eaten with a cocoyam pudding called kwacoco. The name okporoko for stockfish, among the Igbo of Nigeria refers to the sound the hard fish makes in the pot and literally translates as “that which produces sound in the pot”.

Both stockfish and salt cod can be made into lutefisk.

Stockfish is typically sold in whole bales (100 lbs per bale) or half-a-bale, one-quarter bale or even one-tenth-bale.

Dried fish is hygroscopic in nature and absorbs moisture when the climate is humid. When it comes in contact with air or oxygen the deterioration due to oxidation is rapid. Dried fish is also prone to attack by insects. Traditionally, dried fish is packed in baskets made of “palmyra” leaves with a hessian lining on the outside. For exports, dried fish is bulk packed in hessian sacks. Such packages do not provide protection from moisture absorption, oxygen or insects. This highly sensitive product needs to be packed in modern plastic based films / laminates and the possibility of vacuum packing/gas flushing of products also needs to be examined.