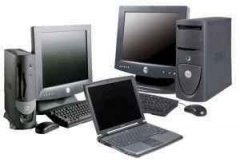 A computer is a general purpose device that can be programmed to carry out a finite set of arithmetic or logical operations. Since a sequence of operations can be readily changed, the computer can solve more than one kind of problem.

The first electronic digital computers were developed between 1940 and 1945 in the United Kingdom and United States. Originally they were the size of a large room, consuming as much power as several hundred modern personal computers (PCs). In this era mechanical analogue computers were used for military applications.

Modern computers based on integrated circuits are millions to billions of times more capable than the early machines, and occupy a fraction of the space. Simple computers are small enough to fit into mobile devices, and mobile computers can be powered by small batteries. Personal computers in their various forms are icons of the Information Age and are what most people think of as “computers”. However, the embedded computers found in many devices from mp3 players to fighter aircraft and from toys to industrial robots are the most numerous.

In the main part, computer equipment, as supplied by reputable manufacturers, is effectively packaged, such packaging being dependent on the particular type of machinery. While manufacturer’s packing may be suitable for the normal rigours of transit, accidents in transit do occur by either impact, bad stow, water contamination, etc. There is such a wide variety of computer and ancillary equipment now being transported throughout the world that it is impracticable to identify the different types and various systems. Nevertheless, a computer is an extremely valuable, sensitive and highly vulnerable piece of equipment and mechanical derangement can occur during the normal course of transit. Where there is a report of damage either cosmetic, or internal, it is helpful if there are test facilities available for the engineering staff within the consignee’s premises or local maintenance operatives to identify the costs associated with re-instatement or, alternatively, identify the cause of non-operation. In this regard it is helpful to have the assistance of support personnel on site who have knowledge as to the indigenous operation of the system which is the subject of the inquiry. Where test or repair facilities are not available, consideration must be given to returning the unit to the plant of the manufacture, if this is an economic proposition. Impact damage by dropping or overstow can distort frames, scuff or damage panels or even cause complete fracture to internal holding sections. External damage to the packing may not be apparent and, therefore, minute examination must be made. It should be remembered that one dislodged connection link can result in computer failure.

Wet damage to computers
Computers shipped or airfreighted from manufacturing plants are normally effectively protected against ingress or contamination by water. However, wet damage does occur. The extent or contamination must be thoroughly investigated to determine whether or not circuit cards and functioning electronic sections have become contaminated or alternatively corroded. Such sections should be removed without delay and, if damage by corrosion is apparent, then replacements can be brought forward. Alternatively, cleaning down and re-fitting may effectively restore the unit to pre-damage condition, hence the necessity for immediate action. The above comments relate to computers and similar equipment coming forward from manufacturing plants. There is also considerable traffic in second-hand computers, from owners utilizing local packing agencies. Accordingly, the type of packing used should be thoroughly examined in order that an opinion as to whether or not it is deemed to be satisfactory for the normal rigours of transit may be given. The use of international symbols on packing cases should be considered as in some instances, the fact of a case being shipped in the wrong position can result in extensive damage. With computer systems there are two separate sections, i.e. software and hardware. Hardware can be loosely described as the central processing unit, i.e. the computer itself, while the software is the feed-in responsible for the supply of required information to the CPU and the associated peripherals. Such peripherals have various extensions by way of keyboards, disc drive units, visual display units, etc. The complete breakdown of any of the peripherals by way of impact or water contamination does not necessitate a rejection of the total system, as replacement direct from source should effectively return the system to pre-damager condition. It must be remembered that an initial rejection of a computer or a system because of what might be considered as scruffy appearance by way of scratching to panels, denting, etc., does not necessarily mean internal malfunction and local refurbishing can, where possible, effectively repair the system. This type of damage, while not serious, cannot be overlooked as a possible indication of bad handling, which in turn could result in internal distortion. Hence, the necessity for a complete internal technical examination.