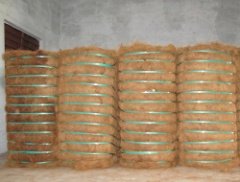 Coir is a natural fibre extracted from the husk of coconut and used in products such as floor mats, doormats, brushes, mattresses, etc. Technically, coir is the fibrous material found between the hard, internal shell and the outer coat of a coconut. Other uses of brown coir (made from ripe coconut) are in upholstery padding, sacking and horticulture. White coir, harvested from unripe coconuts, is used for making finer brushes, string, rope and fishing nets.

Ropes and cordage made from coconut fibre have been in use from ancient times.

Coir fibres are found between the hard, internal shell and the outer coat of a coconut. The individual fibre cells are narrow and hollow, with thick walls made of cellulose. They are pale when immature, but later become hardened and yellowed as a layer of lignin is deposited on their walls. Each cell is about 1 mm (0.04 in) long and 10 to 20 µm (0.0004 to 0.0008 in) in diameter. Fibres are typically 10 to 30 centimetres (4 to 12 in) long. The two varieties of coir are brown and white. Brown coir harvested from fully ripened coconuts is thick, strong and has high abrasion resistance. It is typically used in mats, brushes and sacking. Mature brown coir fibres contain more lignin and less cellulose than fibres such as flax and cotton, so are stronger but less flexible. White coir fibres harvested from coconuts before they are ripe are white or light brown in colour and are smoother and finer, but also weaker. They are generally spun to make yarn used in mats or rope.

The coir fibre is relatively waterproof, and is one of the few natural fibres resistant to damage by saltwater. Fresh water is used to process brown coir, while seawater and fresh water are both used in the production of white coir.

Coconuts are the seeds of a species of palm, Cocos nucifera. These palms flower on a monthly basis and the fruit take one year to ripen. A palm tree may have fruit in every stage of maturity. A mature tree can produce 50 to 100 coconuts per year. Coconuts can be harvested from the ground once they have ripened and fallen, or they can be harvested while still on the tree. A human climber can harvest about 25 trees in a day, while a knife attached to a pole can up the number to 250 trees harvested in a day. Monkeys can also be trained to harvest the coconuts, but this practice is less efficient than other methods. Green coconuts, harvested after about six to 12 months on the palm, contain pliable white fibres. Brown fibre is obtained by harvesting fully mature coconuts when the nutritious layer surrounding the seed is ready to be processed into copra and desiccated coconut. The fibrous layer of the fruit is then separated from the hard shell (manually) by driving the fruit down onto a spike to split it (dehusking). A well-seasoned husker can manually separate 2,000 coconuts per day. Machines are now available which crush the whole fruit to give the loose fibres. These machines can process up to 2,000 coconuts per hour.

Brown fibre
The fibrous husks are soaked in pits or in nets in a slow-moving body of water to swell and soften the fibres. The long bristle fibres are separated from the shorter mattress fibres underneath the skin of the nut, a process known as wet-milling. The mattress fibres are sifted to remove dirt and other rubbish, dried in the sun and packed into bales. Some mattress fibre is allowed to retain more moisture so it retains its elasticity for twisted fibre production. The coir fibre is elastic enough to twist without breaking and it holds a curl as though permanently waved. Twisting is done by simply making a rope of the hank of fibre and twisting it using a machine or by hand. The longer bristle fibre is washed in clean water and then dried before being tied into bundles or hanks. It may then be cleaned and ‘hackled’ by steel combs to straighten the fibres and remove any shorter fibre pieces. Coir bristle fibre can also be bleached and dyed to obtain hanks of different colours.

White fibre
The immature husks are suspended in a river or water-filled pit for up to ten months. During this time, micro-organisms break down the plant tissues surrounding the fibres to loosen them — a process known as retting. Segments of the husk are then beaten by hand to separate out the long fibres which are subsequently dried and cleaned. Cleaned fibre is ready for spinning into yarn using a simple one-handed system or a spinning wheel.

Brown coir is used in floor mats and doormats, brushes, mattresses, floor tiles and sacking. A small amount is also made into twine. Pads of curled brown coir fibre, made by needle-felting (a machine technique that mats the fibres together), are shaped and cut to fill mattresses and for use in erosion control on river banks and hillsides. A major proportion of brown coir pads are sprayed with rubber latex which bonds the fibres together (rubberised coir) to be used as upholstery padding for the automobile industry in Europe. The material is also used for insulation and packaging.

The major use of white coir is in rope manufacture. Mats of woven coir fibre are made from the finer grades of bristle and white fibre using hand or mechanical looms. White coir also is used to make fishing nets due to its strong resistance to saltwater.

In horticulture, coir is a strongly recommended substitute for sphagnum moss because it is free of bacteria and fungal spores, and produces good results without the environmental damage caused by peat mining. Coir is also useful to deter snails from delicate plantings, and as a growing medium in intensive glasshouse (greenhouse) horticulture.

Coconut coir from Mexico has been found to contain large numbers of colonies of the beneficial fungus Aspergillus terreus, which acts as a biological control against plant pathogenic fungi.

Coir is also used as a substrate to grow mushrooms.

Coir is an allergen, as well as the latex and other materials used frequently in the treatment of coir. This should be noted specially for people with allergies using mattresses and other furniture made with it.

Coir fibres make up about a third of the coconut pulp. The rest, called the pith or dust, is biodegradable, but takes 20 years to decompose. Once considered as waste material, pith is now being used as mulch, soil treatment and a hydroponic growth medium.