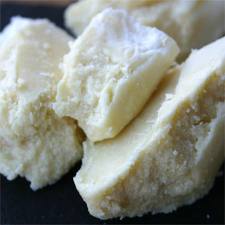 Some food manufacturers substitute less expensive materials such as vegetable oils and fats (fillers and over-sized packaging) in place of cocoa butter. Several analytical methods exist for testing for diluted cocoa butter. Adulterated cocoa butter is indicated by its lighter colour and its diminished fluorescence upon ultraviolet illumination. Unlike cocoa butter, adulterated fat tends to smear and have a higher non-saponifiable content.

Cocoa butter is the major ingredient in the commercial production of both white chocolate and milk chocolate. This application continues to dominate consumption of cocoa butter.

Pharmaceutical companies heavily utilize cocoa butter’s physical properties. As a nontoxic solid at room temperature that melts at body temperature, it is considered an ideal base for medicinal suppositories.

Principally shipped from ports in West Africa and Brazil. The melting point of cocoa butter is at about 38°C. It starts getting soft at 35°C. Due to high claims on this cargo caused by loss of weight, condensation and damage as a result of melting, it is necessary to pay the utmost attention to the stowage. It is recommended not to place a container with cocoa butter next to or on top of heated tanks, engine room bulkheads or any other sources of heat. Stowage under temperature control in a refrigerated container is the preferred stowage for cocoa butter. Carriage temperature is between 15 and 25°C. When stowed in dry containers on deck:, provide a cool stow protected from heat .

Cocoa butter shall preferably be loaded during the cooler times of the day. Should this be impossible the vessel’s staff must then, in rejection of possible claims, enter into the logbook all particular events with accompanying temperatures. Likewise annotations must be made of the inspection and resultant findings by the inspector of the “Cocoa Marketing Board”.

Since cocoa butter emits a rancid smell it should not be stowed together with edible and delicate goods liable to get damaged by this smell, especially when stowed in ventilated containers. Cocoa-butter is shipped in barrels, drums, tins, or cartons. A modern way of shipping (Douala) is in a cardboard box (ca. 1’x1’x10″) containing one block of cocoa butter, packed in a plastic bag.

Gross weight 25.6 kgs, net 25 kgs. In order to prevent loss of contents in case the cocoa butter softens, these cardboard boxes are to be stowed as indicated on the box (“Haut” and “Bas”). This in connection with the closing seal of the plastic bag.

Care should be taken to spread the weight when packing containers to prevent the cardboard boxes being squeezed. This is particularly relevant in high temperatures. Do not stow cocoa butter with groundnuts, sheanuts and cotton-seed (vermin-contamination). When in melted condition, the product is liable to damage by admixture with foreign matters and will take taint from outside odours, including those from packing. Will solidify again if ambient temperature falls below the melting point, but tainting will be retained. Treatment will be required before commercial use. When contaminated by water, the external layer only may be subject to damage.

Powder from ground cocoa press cake. Shipped in paper sacks. When damaged by fire will continue to smoulder for considerable time, even after complete soaking of sacks by water.