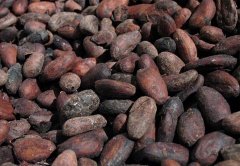 Cocoa trees grow in hot, rainy tropical areas within 20° of latitude from the equator. Cocoa harvest is not restricted to one period per year. Usually it occurs over several months and in many countries cocoa can be harvested at any time of the year. Pesticides are often applied to the trees to combat capsid bugs and fungicides to fight black pod disease.

Immature cocoa pods have a variety of colors but most often are green, red, or purple, and as they mature their color tends towards yellow or orange, particularly in their creases. Unlike most fruiting trees, the cacao pod grows directly from the trunk or large branch of a tree rather than from the end of a branch. This makes harvesting by hand easier as most of the pods will not be up in the higher branches. The pods on a tree do not ripen together; harvesting needs to be done periodically through the year. Harvesting occurs between 3–4 times to weekly during the harvest season. The ripe and near-ripe pods, as judged by their color, are harvested from the trunk and branches of the cocoa tree with a curved knife on a long pole. Care must be used when cutting the stem of the pod to avoid injuring the junction of the stem with the tree, as this is where future flowers and pods will emerge. It is estimated one person can harvest 650 pods per day.

The harvested pods are opened —typically with a machete— to expose the beans. The pulp and cocoa seeds are removed and the rind is discarded. The pulp and seeds are then piled in heaps, placed in bins, or laid out on grates for several days. During this time, the seeds and pulp undergo “sweating”, where the thick pulp liquefies as it ferments. The fermented pulp trickles away, leaving cocoa seeds behind to be collected. Sweating is important for the quality of the beans, which originally have a strong bitter taste. If sweating is interrupted, the resulting cocoa may be ruined; if underdone, the cocoa seed maintains a flavor similar to raw potatoes and becomes susceptible to mildew. Some cocoa producing countries distil alcoholic spirits using the liquefied pulp.

A typical pod contains 20 to 50 beans and about 400 dried beans are required to make one pound (880 per kilogram) of chocolate. Cocoa pods weigh an average of 400 grams and each one yields 35 to 40 grams dried beans (this yield is 40–44% of the total weight in the pod). It is estimated one person can separate the beans from 2000 pods per day. The wet beans are transported then to a facility so they can be fermented and dried. They are fermented for four to seven days and must be mixed every two days. They are dried for five to fourteen days, depending on the climate conditions. The fermented beans are dried by spreading them out over a large surface and constantly raking them. In large plantations, this is done on huge trays under the sun or by using artificial heat. Small plantations may dry their harvest on little trays or on cowhides. Finally, the beans are trodden and shuffled about (often using bare human feet) and sometimes, during this process, red clay mixed with water is sprinkled over the beans to obtain a finer color, polish, and protection against molds during shipment to factories in the United States, the Netherlands, United Kingdom, and other countries. Drying in the sun is preferable to drying by artificial means, as no extraneous flavors such as smoke or oil are introduced which might otherwise taint the flavor.

The beans should be dry for shipment (usually by sea). Traditionally exported in jute bags, over the last decade the beans are increasingly shipped in ‘Mega-Bulk’ bulk parcels of several thousand tonnes at a time on ships, or in smaller lots of around 25 tonnes in 20 foot containers. Shipping in bulk significantly reduces handling costs; shipment in bags, however, either in a ship’s hold or in containers, is still commonly found.

Cocoa beans have numerous similarities to Coffee Beans, with some important differences in processes. They are both fermented (fermented cocoa almost looks already roasted), roasted and ground for use. Cocoa beans come in three primary species, Criollo, Forastero and Trinitario. The Criollo is analogous to Arabica coffee in that it is the cream of the crop and has the most delicate and complex array of flavors. The Forastero can be compared to Robusta coffee in its disease resistance and higher production, but that is where the comparison ends. Where robusta is just horrid 99% of the time, Forastero is not like that. It has a strong full cocoa flavor, but depending on the grade and preparation, can be rather dull. Well prepared Forastero is what most of us are used to eating in chocolate. Finally, Trinitario is a hybrid of the two, and can have various characters of both parents. Often a Trinitario bean is spoken of as having a strong or weak Criollo influence.

For the production of Cocoa Powder and further processing into all kinds of foodstuffs.

Shipped as break-bulk in bags and also in freight containers. Mostly shipped with a franchise to allow for normal shrinkage. Beans which have not been properly dried, and retain over 7,5% moisture, may turn mouldy in transit. If mould cannot be satisfactorily removed, the beans may have to be used for a less valuable product than that for which they were originally intended. Chocolate made from such affected beans will have a musty flavour. Damage to cocoa in the country of origin may not be noticeable from the external appearance of the bags, but should be established on sampling. Country damaged cocoa is usually of grey appearance and internally mouldy. This should not be confused with the natural bloom on the shell, which in appearance can suggest mould but is a natural occurrence and not detrimental to the commodity. On arrival at destination, bags should be stored in a dry place and in the event of water damage, cocoa should be reconditioned without delay. Cocoa has a natural inherent infestation, the tropical warehouse moth, which, if left untreated, can cause considerable damage to the bean plus a great degree of webbing. The condition is controllable by fumigation, and if so treated is normally acceptable to receivers. Cocoa beans are also liable to infestation by worm, which leads to a depreciation of value. Chocolate manufactured from such beans will itself be liable to damage from worm. Loss in colour of the shell through external sources usually has no detrimental effect. Some beans, if shipped in damp condition, may lose colour and become white. Cocoa beans in freight containers have shown damage by way of mould and/or discolouration of the beans. In many instances the condition of the bags giving no indication of the damage to the beans. The use of plastic material inside freight containers has led to considerable sweating and subsequent damage. Containers should be stripped immediately on arrival. Containers should offer good ventilation capability. In certain circumstances, where damage by sweat is encountered and the receivers are only prepared to accept the cocoa with considerable allowances, it may be possible to obtain a better result by separating the damaged beans to be sold separately, delivering the sound portion to the receivers.

Cocoa is packaged in Hussein/jute/poly lined bags or in bulk inside containers. In the latter mode a topless plastic inner liner is fitted into the container to hold the bulk. This is for sanitary reasons.

Condensation damage, taint and infestation are the main risks associated with carriage and loss of quality. When cocoa beans are overheated a separation process produces acid (emitting a sour smell) and combined with moisture this corrodes container paintwork. Direct contact of cocoa beans with steelwork should be avoided at all times.

Container equipment which in general is used for the transport of cocoa beans includes:

It is essential that containers are properly prepared in order to achieve good quality transport out-turn as follows:

Ventilation
The following advises may be given regarding the transportation and ventilation of a cargo of cocoa beans, carried from a relative warm region to a cold(er) Northern region.

The temperature will slowly decrease during the sea voyage going to the North (and possibly increase again if approaching the discharge port in a climatologically milder region). The (nature and impact of the) general instructions given below are not to be considered exhaustive or conclusive and should at all material times be carefully considered as circumstances such as sea- and weather conditions may require and should by no means affect the duty of the carrier to take any and all precautions necessary to ensure a safe, complete and undamaged arrival and discharge of the cargo at the discharge port(s).

This means that if ventilation is stopped because the dewpoint of the hold air is lower than the outside air, it should be checked again one hour after stopping the ventilation.

In case of serious sweating, it may be considered to open the hatches partly during smooth weather and sea conditions only. It should be avoided at all times that spray and/or seawater enters the holds.