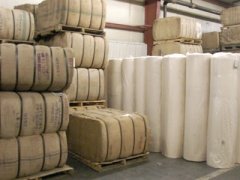 Hessian, or burlap in the US, is a woven fabric usually made from skin of the jute plant or sisal fibres, or may be combined with other vegetable fibres to make rope, nets, and similar products. Gunny cloth is similar.

Hessian, a dense woven fabric, has been historically produced as a coarse fabric, but more recently it is being used in a refined state known simply as jute as an ecofriendly material for bags, rugs, and other products.

The name “burlap” appears to be of unknown origin. The name “hessian” is attributed to the use of the fabric, initially, as part of the uniform of soldiers from the German state of Hesse who were called “Hessians.”

Hessian was first exported from India in the early 19th century. It was traditionally used as backing for linoleum, rugs and carpet.

Hessian is often used to make sacks and bags to ship goods like Coffee Beans; these can be described as gunny sacks. It is breathable and thus resists condensation and associated spoilage of the contents. It is also durable enough to withstand rough handling in transit; these properties have also led to its use for temporary protection as wet covering to prevent rapid moisture loss in setting of cement and concrete by the construction industry. Hessian is also commonly used for making sandbags, empty hessian sacks that, when filled with sand, are used for flood mitigation when building temporary embankments against floodwaters or field fortifications.

Burlap is shipped in bales.

If wet will heat and quickly rot emitting toxic fumes. Liable to spontaneous combustion if contaminated by oil.

Extreme care should be taken when carrying out an examination of wet burlap in an enclosed space. Badly wetted and rotting burlap can emit fumes which are hazardous; respiration equipment is recommended for enclosed space cargo examination.

Reference is made to the relevant IMO regulations on hazardous cargo.