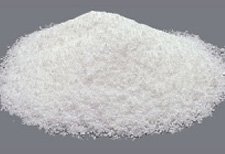 Borax, also known as sodium borate, sodium tetraborate, or disodium tetraborate, is an important boron compound, a mineral, and a salt of boric acid. It is usually a white powder consisting of soft colorless crystals that dissolve easily in water.

Borax has a wide variety of uses. It is a component of many detergents, cosmetics, and enamel glazes. It is also used to make buffer solutions in biochemistry, as a fire retardant, as an anti-fungal compound for fiberglass, as a flux in metallurgy, neutron-capture shields for radioactive sources, a texturing agent in cooking, and as a precursor for other boron compounds.

The term borax is used for a number of closely related minerals or chemical compounds that differ in their crystal water content, but usually refers to the decahydrate. Commercially sold borax is usually partially dehydrated.

Borax was first discovered in dry lake beds in Tibet and was imported via the Silk Road to Arabia. Borax first came into common use in the late 19th century when Francis Marion Smith’s Pacific Coast Borax Company began to market and popularize a large variety of applications under the famous 20 Mule Team Borax trademark, named for the method by which borax was originally hauled out of the California and Nevada deserts in large enough quantities to make it cheap and commonly available.

Handling of Borax in Bulk
Borax generally handles well in terms of its flow characteristics, but attention must be given to the abrasive nature of the particles. Where large quantities and long-term continuous operation of the unloading plant are involved, preference should be given to mechanical transfer equipment rather than pneumatic systems.

Bulk Delivery Systems – Railcars, Trucks, and Containers
Railcars generally have a bottom gate for discharge between the tracks. However, some cars are available equipped for pneumatic discharge either with their own pneumatic systems or utilizing customer’s own equipment.

Trucks are generally equipped with their own pneumatic discharge systems operating at pressures of about 29.4 psi (2 atmospheres) and are capable of delivering into silos up to a height of 100 ft (30 m). Long horizontal runs of piping should be avoided.

Containers (either with or without liners) are emptied by gravity or by suction using customer’s own equipment.

Product Unloading
Generally, gravity unloading is more commonly used, especially with those products, such as borax decahydrate, that tend to cake and form lumps under certain conditions of humidity and temperature.

Gravity unloading is accomplished by discharging product directly from a rail hopper car to a pit located between the rail tracks. It is recommended that an air-operated impact wrench be used for opening and closing the slide gate which can bind with the build-up of product in the slide tracks. Product can then be discharged from the track hopper, at a controlled rate, through an adjustable slide gate to a mechanical conveying system to a storage silo.

Pneumatic unloading is done by vacuum, or combination vacuum-pressure techniques. Neobor and Optibor are non-abrasive and can be easily conveyed by this procedure directly from the car to the silo. A flexible hose with quick coupler is usually attached to a side port on the car with the other end attached to the permanent piping which runs parallel to the silo. This method of unloading has the advantage that the product is not exposed to the elements. Since it is a closed system, contamination from outside sources is eliminated.

Transfer of Borates
Mechanical conveying system can consist of belt conveyors, screw conveyors, and centrifugal bucket elevators. Electric or air vibrators mounted near the discharge opening of the track hopper will facilitate discharge if necessary. It is recommended that mechanical systems incorporate sealed transfer chutes and/or dust extraction.

Pneumatic conveying systems have the advantage of being dust-free. Neobor, Optibor and Borax Decahydrate can be air conveyed by pneumatic pipe systems or air slides. Dehybor, because of its abrasive nature, will require the use of ceramic or hard faced liners at specific points where abrasive wear is expected. These include elbows, transition pieces, and impingement surfaces in cyclones, diverters and receivers. The same precautions noted for the pneumatic unloading of Borax Decahydrate would apply if air slide unloading is to be considered. It is also important that dry, cooled air be used and care be taken to maintain air conveying temperatures below 95°F (35°C). The use of air conveying, for locations that are frequently humid with high ambient air temperatures, is not recommended.