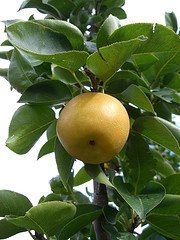 Chinese (or Asian) pears comprise a large group of pears that are crisp in texture and ready to eat at harvest. Asian pears do not markedly change texture after harvest or storage, as the European pears do. They are highly susceptible to surface damage from abrasions to the skin. Careful handling from harvest to consumption is necessary to avoid unsightly fruit damage.

Asian pears are also called Oriental pears, Chinese pears, Japanese pears, nashi, sand apples and salad pears. Although most Japanese pear varieties are roundish, their texture and flavour are entirely different from those of apples. The main Chinese pear varieties are pyriform. Asian pears should be juicy (not mealy) and sweet with 11% to 14% SSC (depending on cultivar).

Asian pears should be stored at 0°C in trays complete with packet pack and poly-liners. It is necessary to maintain a relative humidity >90% in the storage atmosphere because fruit are susceptible to water loss. When water loss has been greater than 5% to 7%, fruit become dehydrated and have a shrivelled appearance. Eating quality is also affected and fruit lack a crisp and juicy texture.

Refrigeration inhibits the onset of rotting, but eventually the fruit tissue loses its resistance. Infected fruit packed in polyethylene cartons show an increased tendency to decay.

Internal breakdown and chilling injury can be a problem with Chinese pear cultivars. Internal browning or core breakdown is the main world-wide consumer complaint. Development of brown to dark-brown water-soaked areas in the core and/or flesh occurs during storage, with no visible external indication of internal browning. This disorder can be avoided if the fruits are picked when still green with a few fruits at the top of the tree showing some light yellowish green colour (after about 180 days after full bloom).

Based on limited studies it appears that the magnitude of CA benefits for Asian pears is cultivar-specific and is generally less than that for European pears and apples.

Oxygen levels of 1-3% for some cultivars (such as Nijisseiki) or 3%-5% for others (such as Ya Li) help retain firmness and delay changes in skin colour. Low O2 injury manifests itself as discoloured surface depressions. High CO2 injury is manifested as core or medial flesh browning, with cavities developing in severe cases as a result of desiccation of dead tissue.

Asian pears are sensitive to CO2 injury (above 2% CO2 for most cultivars) when stored longer than a month.