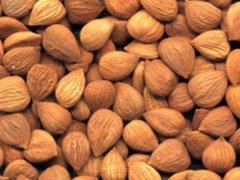 An apricot kernel (Prunus armeniaca, “Armenian plum” in Latin) refers to the kernel of a species of Prunus, classified with the plum in the subgenus Prunus. It is known for containing amygdalin, an ineffective, and sometimes dangerous, purported alternative cancer treatment.

Seeds or kernels of the apricot grown in central Asia and around the Mediterranean are so sweet that they may be substituted for almonds. The Italian liqueur amaretto and amaretti biscotti are flavored with extract of apricot kernels as well as almonds. Oil pressed from these cultivars has been used as cooking oil.

Apricot kernels can sometimes be strong-tasting and bitter. They feature in recipes for apricot jam, and Italian amaretto cookies and liqueur. Taken in excess, they may produce symptoms of cyanide poisoning, including nausea, fever, rash, headaches, insomnia, increased thirst, weakness, lethargy, nervousness, various aches and pains in joints and muscles, and a drop in blood pressure.

In 1993, the New York State Department of Agriculture and Markets tested the cyanide content of two 220 gram (8oz) packages of apricot kernels that were imported from Pakistan and were being sold in health-food stores as a snack. The results showed that each package, if consumed entirely, contained at least double the minimum lethal dosage of cyanide for an adult human. The apricot pits were recalled and removed from stores. In spite of this, there were no USA deaths and only one serious toxicity from apricot kernels reported from 1979 to 1998. On average, an apricot kernel contains about 0.5 mg of cyanide.

The cargo must be protected from moisture and from excessively high temperatures caused by solar radiation etc. (risk of self-heating).

Stow cool, dry and well ventilated. The product must not be stowed near heat sources.